Baptism is not absolutely necessary for salvation–St. Augustine

Posted on March 30, 2018 by highplainsparson

For whatever unbaptized persons die confessing Christ, this confession is of the same efficacy for the remission of sins as if they were washed in the sacred font of baptism. For He who said, “Unless a man be born of water and of the Spirit, he cannot enter into the kingdom of God,” John 3:5 made also an exception in their favor, in that other sentence where He no less absolutely said, “Whosoever shall confess me before men, him will I confess also before my Father which is in heaven;” Matthew 10:32 and in another place, “Whosoever will lose his life for my sake, shall find it.” Matthew 16:25 And this explains the verse, “Precious in the sight of the Lord is the death of His saints.” Augustine, City of God, Book XIII, chapter 7.

The Baptism of Pocahontas

Posted on March 11, 2014 by highplainsparson 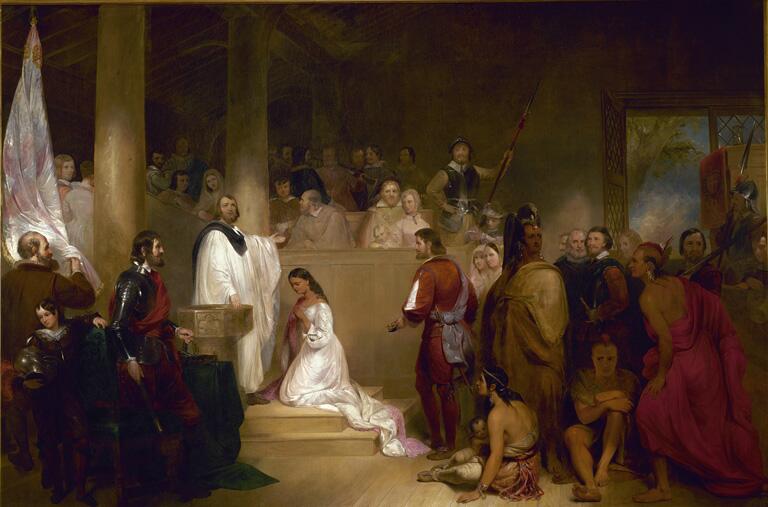 If Christianity Is True, Why Are There So Many Different Churches?: Part 2, The Brain On Sin

2. Christians are still sinners, and this affects their brains.

The sinfulness of man also extends to the thoughts and intellect.

Because that, when they knew God, they glorified him not as God, neither were thankful; but became vain in their imaginations, and their foolish heart was darkened. Romans 1:21

Ever since the fall of the first man, all people in this world are sinners by nature, and that includes Christians. (Romans 5:12)  The unbelieving world has had its thinking turned into vanity and its heart (considered the seat of the thoughts and emotions in ancient Jewish culture) made foolish and darkened. Unlike the unbelieving world, Christians are forgiven of their sin, and they are winning the victory over it little by little by the power of the Holy Spirit. But they still struggle against sin in their lives. Likewise the brains of Christians are still impaired by sin. This prevents even sincere Christians from having full unity in the truth, even when they come to the same 66 books of the Holy Scriptures with willing hearts and a teachable spirit. Jesus promised to send the Holy Spirit to “guide you into all truth,” (John 16:13) but this is a gradual process. Just as the Christian is not immediately perfect in personal holiness the moment he is born again, he also is not granted perfect understanding overnight.

It takes hard effort to gain a thorough understanding of the Scriptures, and the lingering mental impairment of sin that remains in Christians prevents them from coming to a perfect understanding this side of heaven. The effects of sin on our brains have been called the noetic effects of sin.  These effects of sin on the brain prevent us from seeing clearly, thinking logically about Scripture, seeing the connections between the different parts of Scripture, interpreting context, and comprehending what we are hearing or reading.  And while it is unhappy that true Christians must be divided (to some extent) on second tier issues, it’s equally important that we obey God’s commandments to the extent that we are able to comprehend them, even the “second tier” instructions. Jesus said, “teach all nations, …teaching them to observe all things whatsoever I have commanded you.”  Matthew 28:19, 20   In these cases where genuine Christians disagree, they ought to remember not to seek unity in form without unity in doctrine. All true believers may come to a sufficient knowledge of everything required for salvation by a diligent study of the Scriptures. But other matters besides just that which is absolutely necessary for salvation are addressed in Scripture, too. It takes hard work to come to unity on these matters, but it’s far better to try than to just gloss over them and pretend they’re not important.

Even though some issues which divide sincere Christians are not essential matters of salvation, they can still be very important for the order of the church. If a family with young baptized children came to a church which did not believe in infant baptism, and their children were later admitted to the Lord’s Supper without being baptized again, it could lead to a disagreement and division in the church over whether they had been correctly baptized or not. The confusion over whether the kids had been baptized could turn the sacrament of baptism, which Christ gave to strengthen the assurance of those baptized, into a source of doubt and uncertainty. Other parents might resent their young children not being baptized. And so as hard as it is, the proper course on many of these not-first-tier but nonetheless important matters that are addressed in Scripture is that each particular church be clear on where she stands on it, according to the best light she has on the Scriptural teaching. And this puts some limits on full communion between churches.  Again, it’s not so much that these matters are not sufficiently clear from the Scriptures, but sin is still having an effect on our brains.

And even where a proper concern for obedience and church order keeps us divided in name and formal communion, we can still be united in spirit and have times of fellowship, study, and prayer now and then with those Christians from other churches who are being saved as we are.  (Although it is important that the primary feeding and most frequent fellowship of a Christian occur in the local church where he or she has made a public covenant with other believers to walk together in the Lord.)