Posted on March 30, 2014 by highplainsparson

In December 518 B. C., the word of the LORD came to the prophet Zechariah, 2 years after his first vision. (Duguid)  By this time, the temple had been dedicated, but it wasn’t yet completed.  Since being restored to the land of Judah, after the Jewish people had been captive in Babylon for 70 years, not everything had gone as planned.  The Lord had been gracious to restore His people to the Promised Land after they had been taken away, but they had been lazy in the rebuilding effort, getting distracted by other concerns instead of focusing on serving the LORD in Spirit and truth.

Zechariah 7:1 And it came to pass in the fourth year of king Darius, that the word of the Lord came unto Zechariah in the fourth day of the ninth month, even in Chisleu;

2 When they had sent unto the house of God Sherezer and Regemmelech, and their men, to pray before the Lord,

3 And to speak unto the priests which were in the house of the Lord of hosts, and to the prophets, saying, Should I weep in the fifth month, separating myself, as I have done these so many years?

4 Then came the word of the Lord of hosts unto me, saying,

5 Speak unto all the people of the land, and to the priests, saying, When ye fasted and mourned in the fifth and seventh month, even those seventy years, did ye at all fast unto me, even to me?

7 Should ye not hear the words which the Lord hath cried by the former prophets, when Jerusalem was inhabited and in prosperity, and the cities thereof round about her, when men inhabited the south and the plain?

The two messengers sent from Bethel to the north of Jerusalem were asking a logical question.  Ever since the first temple had been destroyed, they had been observing a fast in the fifth month of the year (according to the Jewish calendar) to mark the event, ask forgiveness, and plead God’s mercy.  They had also been fasting in the seventh month of the year to mark the date of the assassination of Gedaliah the imperially-appointed Jewish governor. (Jeremiah 41:1-3, Duguid)  Now that the temple had been rededicated, were they required to keep observing these fasts?, they came to ask.  The question makes sense, but the LORD takes the opportunity to give a deeper and more meaningful rebuke.  That is, were they truly fasting out of sorrow in their hearts, and repenting to the LORD, or had they just been going through the motions these last seventy years?  Before exile in Babylon, when they were eating and drinking, not fasting, were they giving glory to God in their feasting or were they vainly exalting themselves and ignoring the God of Israel?  What difference does feasting or fasting make if their hearts are not tuned and eager to hear the word of the LORD, which he had spoken through the prophets before enslavement and exile in Babylon, like through the prophets Jeremiah and Haggai? 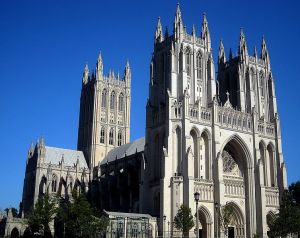 Let us remember that the service which God requires, although it includes external means which are absolutely vital for the spiritual life of our souls (the hearing of the word, public prayer, songs of praise, the sacraments of baptism and the Lord’s Supper), yet going through the motions externally is not enough.  We can fool ourselves into thinking we are good Christians by having our names on a membership role, by going to church, and by partaking of Holy Communion.  These things are required of Christians in God’s holy word.  But the vital life of the soul is what matters most to God, and these external things are meant to feed it by placing Christ before our eyes and in our ears and hearts.  If our hearts are hard and our ears are dull to the word that the Lord speaks in His church, these good things will not do us any good.  That service which God requires starts in the heart, which only God sees, and flows out in obedience to everything God has commanded, the way we speak and worship, and also, the way that we act in love toward those who need it most.

8 And the word of the Lord came unto Zechariah, saying,

9 Thus speaketh the Lord of hosts, saying, Execute true judgment, and shew mercy and compassions every man to his brother:

10 And oppress not the widow, nor the fatherless, the stranger, nor the poor; and let none of you imagine evil against his brother in your heart.

11 But they refused to hearken, and pulled away the shoulder, and stopped their ears, that they should not hear.

12 Yea, they made their hearts as an adamant stone, lest they should hear the law, and the words which the Lord of hosts hath sent in his spirit by the former prophets: therefore came a great wrath from the Lord of hosts.

14 But I scattered them with a whirlwind among all the nations whom they knew not. Thus the land was desolate after them, that no man passed through nor returned: for they laid the pleasant land desolate.

Through the mouth of His prophet Zechariah God speaks the same word to His people that He’d spoken through the prophets that had come before.  Just decades prior, in the gate of the temple of the LORD, Jeremiah stood and said,

The temple of the LORD is intended to be a meeting place of His people within His presence, so that they will become more like him, to think His thoughts and reflect His mercy.  But tragically, the people of Judah trusted in the physical structure of the Temple as a symbol of God’s favor upon them, assuming that he would always stand with them no matter what, instead of examining their hearts to be sure that they stood with him.  What was the result?  God sent them away from that place, enslaved and cruelly mistreated by a barbarous army of marauders, in order that in future generations the Jews might learn to serve the LORD from the heart.

Let us remember their example.  Maintaining a beautiful church building and keeping the traditions that remind us of God’s favor to us in the past are not enough, if we do not know Him, enjoy Him, and reflect His love to others.  A true relationship with the Lord, standing by grace through faith in Jesus Christ, is intended by God to yield fruits of obedience in our lives.  Grace in the heart breaks out in action: in acts of obedient worship and in love to others.  The God who saved us through Jesus Christ and gathered us together as His body is the same God who said,

James 1:27 Pure religion and undefiled before God and the Father is this, To visit the fatherless and widows in their affliction, and to keep himself unspotted from the world.

Let us as the people of God draw near to Him, not just with our feet every Sunday, but with our hearts, and daily in meaningful prayer, so that we may be made more like him.  And let our lives abound with the love of Christ, opening our hearts with mercy, grace, and forgiveness to the most forsaken and looked-down-upon among us, welcoming the stranger, the oppressed, the hurting, and the disadvantaged to experience the love of Christ as we have, through our example of love to them.  If we do not, God will have no choice but to remove us from our place with the whirlwind, ripping through our empty traditions like a tornado, as He did to His hard-hearted people of old when they were packed off to the evil land of Babylon.